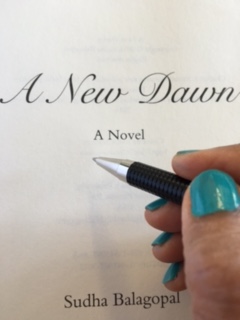 I remember signing my name over and over as I attempted to get the right flourish and the right curve, the cursive script an art I needed to perfect. The covers and insides of my books flaunted twists and curls I  practiced endlessly in my quest to find a signature as individual as myself. My hand turned into an embossing machine striving to make the autographs identical.

That was in fifth grade, at age ten. I paid careful attention to the writing of my name for I believed then that the two words were an extension of myself and embodied my spirit.

. . . Until signing became a chore and thus, meaningless.

I am overwhelmed by the number of times I’ve had to put my name down in the process of living: when I filled out job applications, when I opened bank accounts, when I signed a contract releasing the other party from legal responsibility and every time I purchased something. Often, putting my name down on paper meant an acknowledgment of rules—a rental lease for example. The sign became a commitment, a promise, and a verification of my identity among other things.

There is no enjoyment in such routine activity.

What’s worse is that, in this digital age, we are abandoning the pen-written signature. The computer carries the typed or screen-squiggled name to the recipient without the semblance or pretense of anything personal.

Then, my first book came along and a reader requested an autograph.

In adulthood signing my name had devolved to automaton mode, it’s something I did routinely several times each day. I signed when I purchased something, not the other way around. It’s the same two words I’d transcribed a million times in my life, without sparing an extra thought to it. Now, someone had bought my book and was asking for my signature. I remember staring blankly at the person in front of me, thinking, “You want my signature? For provenance? I did write this book!”

It dawned on me, much later, that readers want me to write out my name for entirely different reasons.

They want the author’s name on the book because it is something from the writer that they can take with them. The book is printed with the author’s name on it; but when it carries an autograph, it becomes personal. And therein lies the value. It is a memento of their brief encounter with the writer. It is also how they remember the person who wrote the book. The signature makes it valuable, not in dollar terms, but in making the book unique.

In today’s digital age, e-books are popular for their convenience and portability. But, they cannot be signed or made personal in any way.

Signing a book is now my pleasure. I am honored when people buy my book, and I consider it my privilege to sign it. In an age where signatures have mostly become meaningless, an autograph in a book remains one of those old-fashioned arts that retains its charm.

8 thoughts on “The Write Flourish”